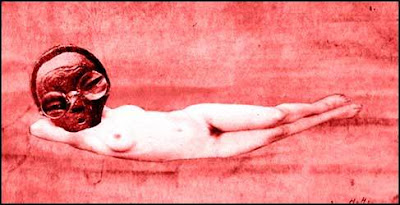 I would like to start off the blogs for this semester with Hannah Hoch. With both my art history class and Berlin history class, the DADA movement is a repeating factor, and since Hoch used photography in her DADA art work (though appropriated), she is just what I want to talk about.
Her work is blatantly feminist even though the DADA artists claimed that their work had no real meaning other than an illogical/ irrational response to the horrors of world war. This is interesting because she is adding an aspect of feminist meaning to what was supposed to be irrationality in art. If logical thought lead to the war, then dada artists strove to be the opposite and illogical as a protest or statement against it. Hoch, however, along with other female dada artists used specific images of females from the commercial society of that time and arranged them to suite the irrationality of dada. She certainly did share the same feelings of anti-war/ anti-art, but she also adds her attitude toward the roles of women in her society and in the war era. The reproduction above is a good example of Hoch's statements about the depiction of women during her lifetime. Or since the image is taken from a classical depiction of the female nude, perhaps it is a statement on the depiction of women in art. She places a photo-montage head made up of two different sized eyes seen through glasses atop a voodoo-type mask. This head is made a part of this beautiful female nude that is stretched across the picture plane in all her naked glory. Dada images always have a sense of humor attached and Hoch is no different here. I feel as though she is making fun of this classical, outdated view of a female by placing a huge head on it that seems to be oogling at its own curvy physique (notice the mouth is saying "OOOooo" as in "OO lala"). The models in the advertisements are representing what the media says every woman wants to be: a tall, thin, cute, and fashionable female. Hoch's argument is the same as any feminist of her day: that women are much more and that we all have our own uniqueness as females. Hoch only plays this up and jokes about it more by adding bright pink color that is so typical with baby girls.
Her work includes both her high sense of feminism and the absurdity of the dada style. She was part of an era that felt overwhelming loss and aimlessness in the wake of both world wars while also responding to the position of women and her own place in society as a female.
Posted by PhotoUTSA at 8:53 PM